Dinosaurs - Dig for the Truth
Please note that  our Day of the Dinosaurs field trip is no longer offered because Science Partners was banned from Dinosaur World!  See information at the bottom of the page. 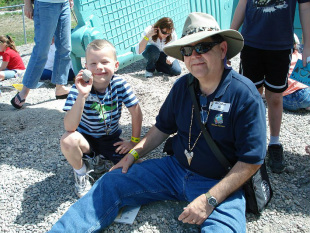 Join the Cliftons as we journey back in time to the days when dinosaurs walked with man.  We'll dig for the truth in Mulberry, located in Florida's "Bone Valley" and known for its phosphate mining industry. We'll spend the morning studying dinosaurs.  We'll find out if dinosaurs are mentioned in the Bible (and were any ever found in Florida), learn how fossils are made, and even see real fossils and a scale model of Noah's Ark.  We will learn how the worldwide flood affected Florida’s past by fossilizing the remains of sea and land animals and plants.

In the afternoon we'll visit Mulberry Phosphate Museum.  The exhibits in the main gallery represent Florida's past.  We will see a variety fossilized remains and models of many animals that lived in Florida long ago and were actually found in central Florida.

Bring along a small spade to use on our fossil dig outside the museum where we will search for shark’s teeth and other small fossils that we can keep!  We have also found fossilized shells, fish vertebra, camel teeth, alligator teeth, bison teeth, stingray scales and mouthplates, and more!  The Cliftons will provide sifting baskets and fossil ID charts as well as extra spades and digging tools if you don't have any.

PLEASE NOTE:
The phosphate museum is closed on Mondays, so this Creation Adventure may be scheduled on another day of the week.
Minimum number: 35.
Maximum number: 50.
Cost:   Free for 2 years and under;
$18 per person (3 years through adult).
Tolls:  If you travel on the Polk Parkway, the cost is approximately $3.00 round trip from Orlando area (depending on how you travel home). 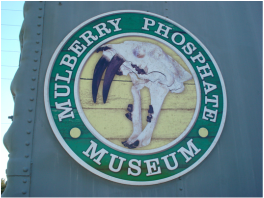 BEGIN YOUR ADVENTURE
The phosphate museum is closed on Mondays, so this Creation Adventure may be scheduled Tuesday through Friday.  To visit our web calendar and check for available dates or scheduled trips, click here.

CONTACT MERILEE CLIFTON at 407-808-4458 (cell / text) or sciencepartners@cfl.rr.com with any questions.
Science Partners Banned from Dinosaur World:
Science Partners received a letter from Dinosaur World (located in Plant City, FL) in November of 2017.  At the end, the owner said, “the management of Dinosaur World has determined that this is no longer a workable arrangement and we ask that you cancel any future scheduled field trips and do not plan any new ones.”  Of course, we were totally shocked.  We have been taking groups there for almost 20 years and have literally taken thousands of people through this park.  At the end of last school year, the owner accused Bill of trying to force his views on other guests in the park.  We wrote a long letter explaining to her that he does not talk to other guests in the park, and the person he was talking with was the teacher of the group we brought (she had on a red shirt and jeans and was not in a school uniform).  The teacher was asking some questions and Bill was talking with her.  She was very happy for her Christian school middle school students to learn about dinosaurs and fossils from a creation viewpoint.  We assured the owner that we didn’t “force our beliefs” on anyone or even interact with other people in the park – but we only talk with those in our group.  We told her that the people we bring are coming because they believe like we do and want to learn from our viewpoint.  We thought all was well.  But, after we took The First Academy Orlando’s second graders (two days in early November), we received a letter saying, “There are some concerns that we have which have brought us to the decision to no longer allow Science Partners to conduct private tours at the park.”  The concerns were:

Some other guests and school field trips have mistaken our tour to be a part of the Dinosaur World experience and this may “cause some confusion and misunderstanding about what to expect on a visit to Dinosaur World.”   They also noted that we don’t do Dinosaur World’s fossil dig (they know that we dig at Mulberry Phosphate Museum in the afternoon) and that we don’t participate in their Exploration Cave Show or Triviasaurus Rex game show which they “feel adds value to our guest’s visit.”  That’s like saying we can’t go to SeaWorld unless we go to every show or ride Kracken, etc.